I have something so good to report, it’s practically life-changing. It’s so good, it’s up there with sex, finishing college, and Heath Bar frozen yogurt with hot fudge sauce and walnuts. It’s so good, I should charge money for it.

I figured out how to, fairly easily and safely, remove and install a transmission using a mid-rise scissors lift, getting around the “but the body of the lift itself is in the way of the transmission ” problem that has plagued do-it-yourselfers since mid-rises became affordable. You need a $150 scissors lift table, a wooden board, four milk crates, and a short section of 2x4. It’s trivial.

But I’m getting ahead of myself.

Background
About seven years ago, I bought a BendPak MD6XP mid-rise scissors lift. I’ve written about this on 2002FAQ, the Pelican Parts BBS, in my Roundel column, and in my book. A mid-rise scissors lift is like a big scissors jack. You drive the car over it, then swing the arms into position beneath the subframes, frame rails, or jacking points. The advantages are that it picks the car up four feet (which is high enough that you can easily sit fully upright beneath a car), it allows easy access to the engine, suspension, steering, and wheels, is fairly compact, can be moved easily, has no real installation other than rolling it into place and plugging it in, and is fairly affordable (about $1200 to $2000). The disadvantage is that the body of the lift itself is directly in the way of the middle of the car. For small things in the middle of the car, like an exhaust or a center support bearing, this isn’t a big deal; the lift has many cut-outs; you can literally crawl between the legs, sit right in the middle, and reach up. But what you can’t do is roll a jack through the body of the lift. The lift’s legs are in the way. What I tell people is that, if they have the ceiling height and garage space for a post lift, and they can afford the purchase and installation price of a post lift, get a post lift, but if, like me, they’re ceiling height-limited, they’ll love having a mid-rise as opposed to having nothing.

When I had my ’82 Porsche 911SC, the mid-rise was perfect for engine drops; using the lift in combination with a scissors lift table to hold and drop the engine was so easy it almost wasn’t fair. But the Porsche is a perfect candidate for a mid-rise scissors lift, since, on the Porsche, everything’s at one end or the other; there’s very little in the middle of the underside of the car. In contrast, on a conventional rear-wheel-drive car, the body of the lift is in the way of the transmission. Well, it’s not, actually; the lift has a cut-out in the front directly beneath the engine and transmission, allowing unfettered access. If I had the upper body strength of Dwayne Johnson there’d be no issue, but I’m just not strong enough to simply reach in there and pull and install a transmission. Like me, most people need a jack to support the transmission during installation and removal. 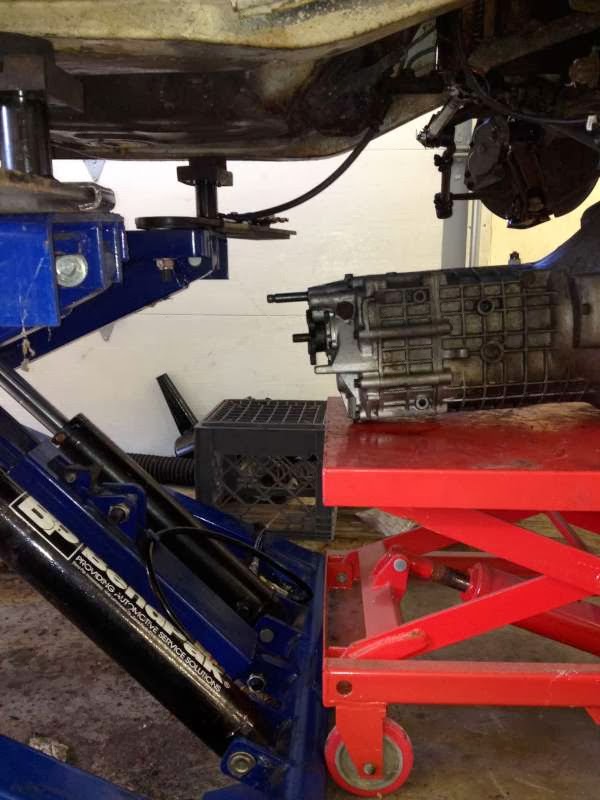 The First Attempt
Years back, I found a way around this. I discovered and posted a somewhat convoluted technique where you turn the car around so that the engine is over the end of the lift without the cut-out. This seems counter-intuitive, but the end without the cut-out doesn’t have the hydraulic cylinders. Instead it has an open leg, over which you could make a flat floor by putting a board on top of a pair of wheels, letting you roll your transmission jack onto the board and thus actually inside the body of the lift, far enough back that you could move the transmission into position. This is shown in the following pics. 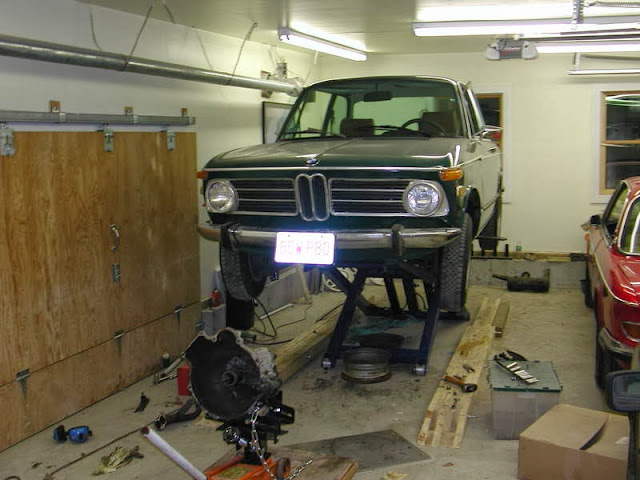 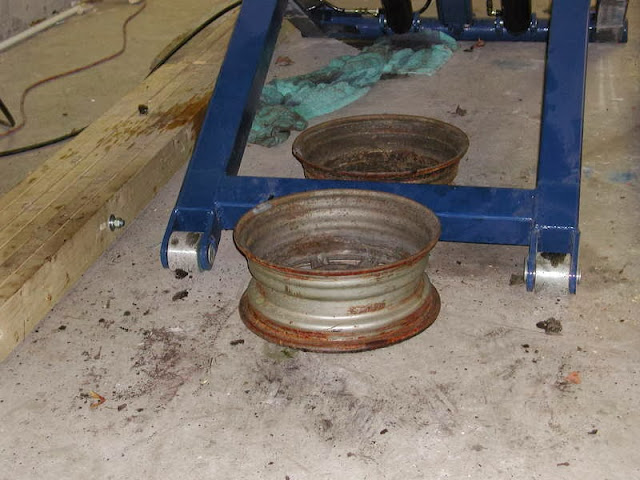 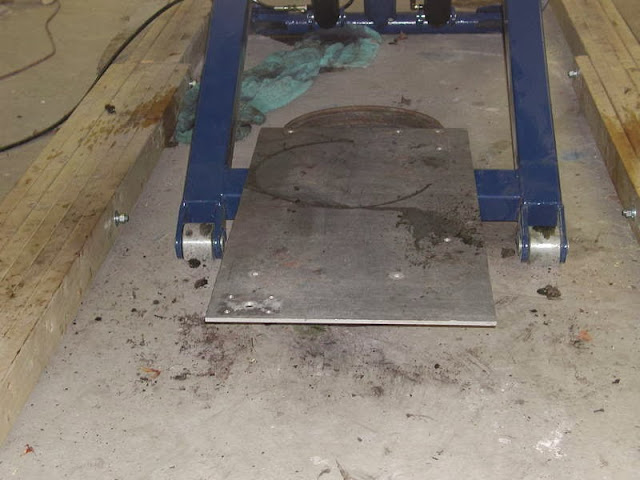 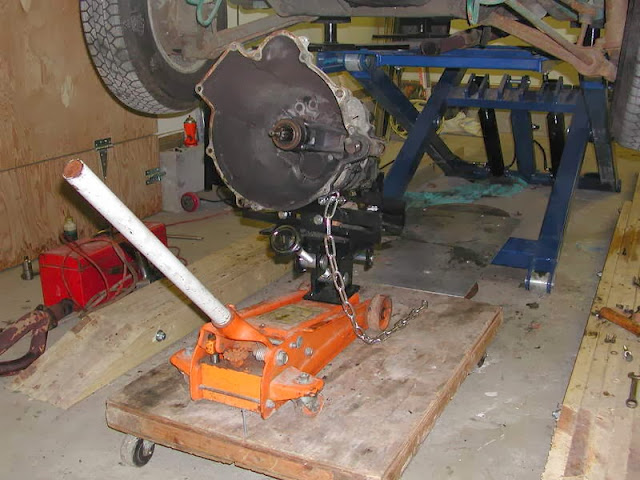 From here on in, it got hairy, because you needed to tilt the transmission ass-up at a steep angle to have the back of the transmission clear the cross-member in the body of the lift (remember, you've put the nose of the car over the end of the lift without the cut-out; see below). Plus, to make it work, you needed to have that cross-member as far back as possible, which meant the car needed to be off-center forward on the lift. For all these reasons, I never liked this method, and never used it again. 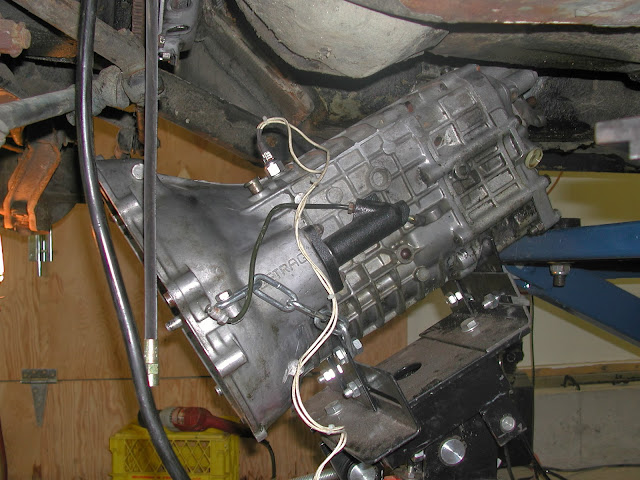 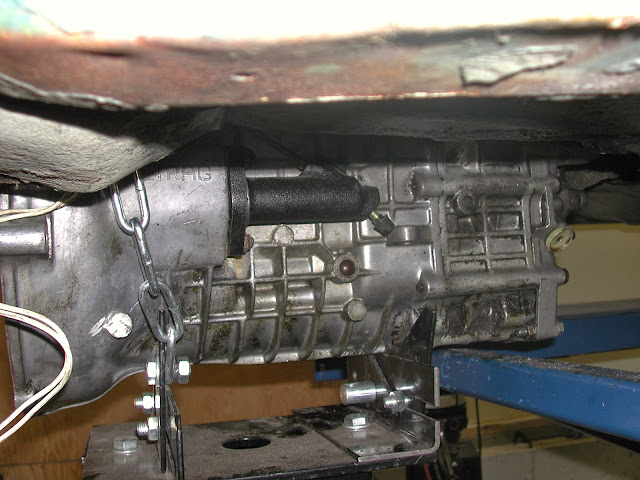 The Second Attempt
I used an alternate method when I needed to do the clutch on my Z3 M Coupe. With the car on the lift, I removed the exhaust and driveshaft and every bolt holding the trani to the engine except one bellhousing bolt, then rolled the car off the lift onto the ground, jacked it up on jackstands, and pulled the trani the old fashioned way. This was facilitated by my purchase of a 1965 Heim-Werner “they don’t make ‘em like that anymore” transmission jack. This thing is so sweet, so built, so finely adjustable, with jewel-like movements in three degrees of freedom of the business end, that having the car on the ground wasn’t so bad. To install a trani, I did it in reverse – installed it on the ground with the Heim-Werner, held it in place with one bell housing bolt, then rolled the car onto the lift to allow easy access to attach everything else. Once I had the Heim Werner, I took my Harbor Freight transmission jack adapter in the photo above and heaved it into the Newton metal recycling bin. 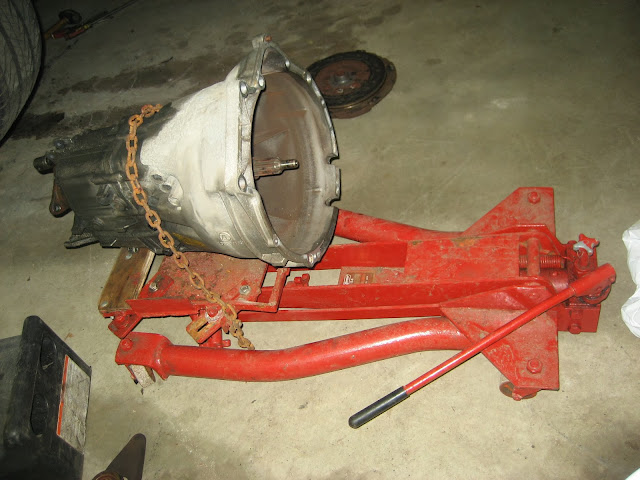 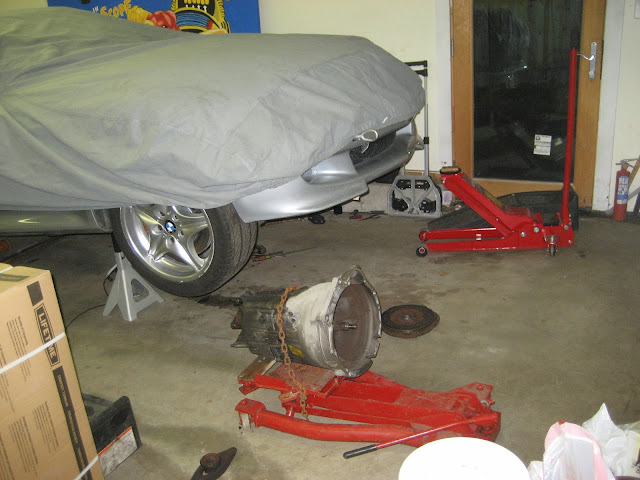 Third Times the Charm: The New Way
I’m installing a Getrag 245 5-speed into the 2002tii. I wasn’t sure which method I’d use. But, for starters, the exhaust and driveshaft and everything else had to come out. So I put the car on the lift the “normal” way, with the engine over the cut-out. When the trani was ready to drop, with just one bolt holding it in, I tried something new. I grabbed my son Ethan (I’m amazed I’d never done this before with any of my three sons, but they’re young men, and rarely home :^). With four hands on the 4-speed, we had no trouble getting it out. “That was easy,” I thought. Of course, gravity was on our side. The next day I borrowed Ethan to help me test-fit the 5-speed. Unfortunately, the combination of up being harder than down, the added weight of the 5-speed over the 4-speed, and the restricted access created by the body of the lift (you can’t position yourself the way you’d like because the lift is in the way) made me abandon this path.

I looked at the lift and thought… how can I get the transmission, and the jack it rides on, further back where it needs to be, when anything that rolls on the ground hits the base of the lift? I thought about whether there was some method of cantilevering the transmission out on an arm several feet in front of the wheels of the jack or scissors lift table. The engineering struck me as prohibitive.

I envisioned a movable platform, supported on furniture dollies so the whole thing could be rolled into place. Then, I thought, I have the scissors lift table; what I really need is a second scissors lift table so one table could be put on each side of the car and the platform stretched across them. This would allow the whole thing to not only be rolled fore and aft, but also to be raised and lowered one side at a time. Scissors lift tables are about $150 at Harbor Freight. I thought, if that’s what it takes to do this safely, I’m game.

I was about to run out and buy a second scissors lift table when I realized I needed to take measurements for the platform itself. And what would I build the platform out of? Between the transmission jack and the trani, we’re probably talking 150 to 200 pounds. It couldn’t just be a wooden shelf. It needed to be braced, probably wood on top of several 2x4s, maybe 2x6s. I’m not a right-brained guy. I need to try things, actually see them in front of me, to visualize. I went back out to the garage, found four milk crates, and stacked them two high on either side of the lift. The distance between them was about 40”. I had some 48x24 particle board shelves and laid one across the crates, just to visualize. This is shown in the pic below. The crates are snug against the sides of the lift, and the board is slid back until it hits the lift. 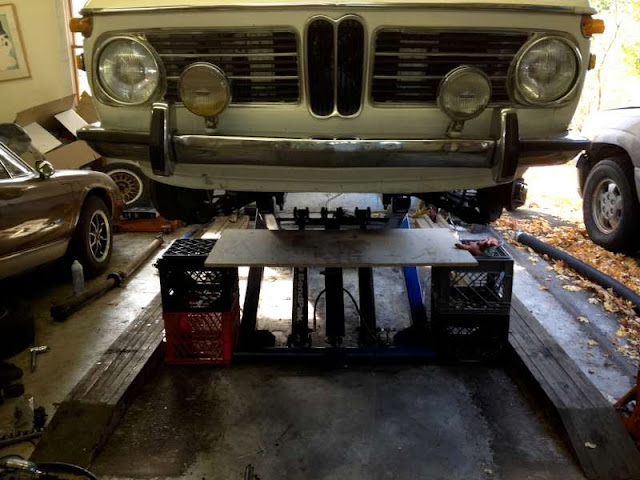 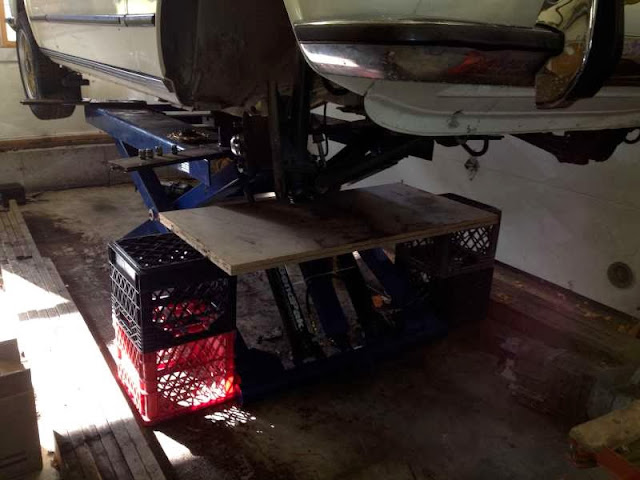 I thought, this board is too small in both width and depth. The depth needs to support the entire transmission jack and transmission, and it’s too shallow. And width-wise, they really ought to come out farther on the sides to be certain they don’t slide off the milk crates. And I’m not really going to use milk crates anyway.

I was still looking, but not seeing. I can be pretty dense sometimes.

I took the massive Heim Werner transmission jack, muscled it onto the lift table, jacked the table up even with the board, and slid the pair of them forward so I could have some sense of the dimension and balance issues. The edge of the lift table was flush with the edge of the board. I threw on a second board just to make sure it wouldn’t buckle from the weight of test-fitting the jack. Then I slid the transmission jack forward so that its front wheels were on the shelf, again, just to test-fit and see how wide the board really needed to be. 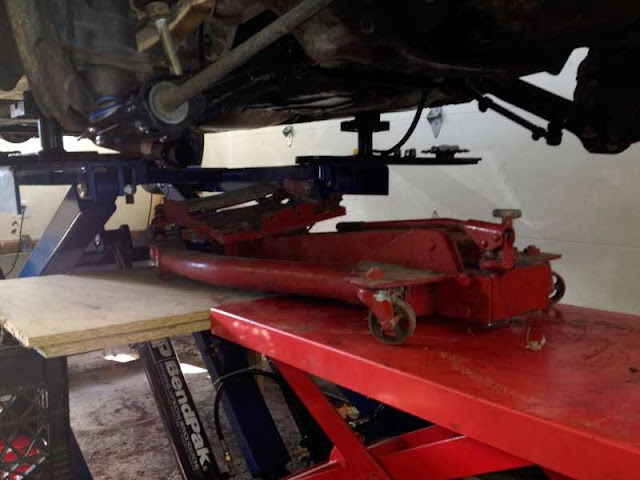 I took a 2x4 and cut two 22” sections (the height of the underside of the boards). I put one section in the middle of the boards to prevent them from sagging. I put the other at the very front of the boards, so when the front wheels of the jack (with the trani on it) is rolled off the lift table, the boards are supported and don't tip forward off the milk crates. 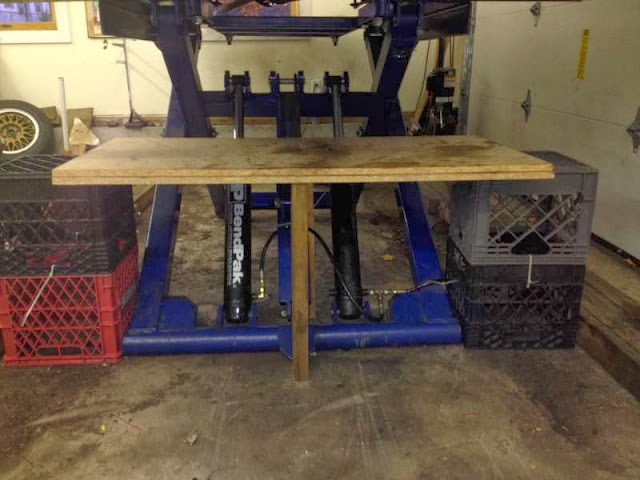 I then did a test-run with the transmission on the jack. It works perfectly. The pics are below. 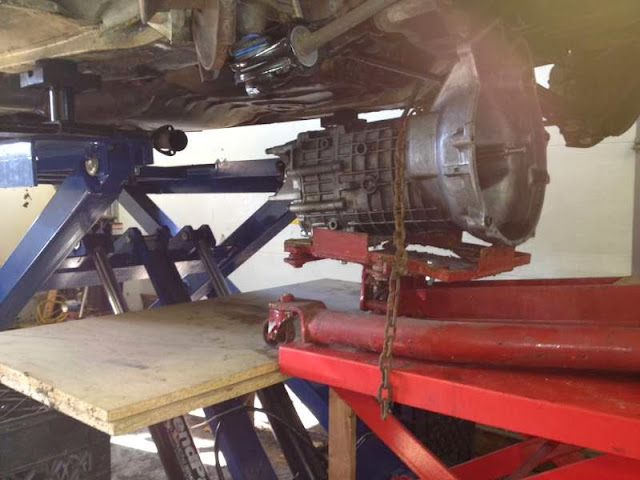 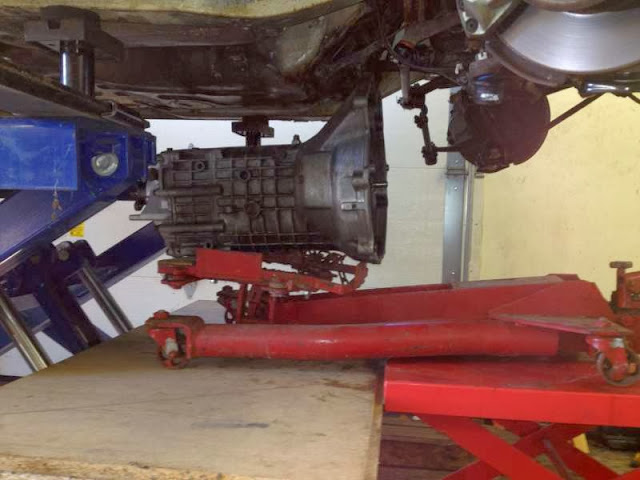 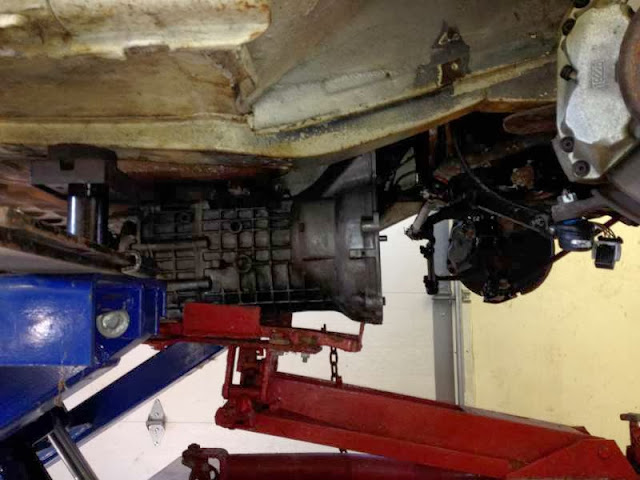 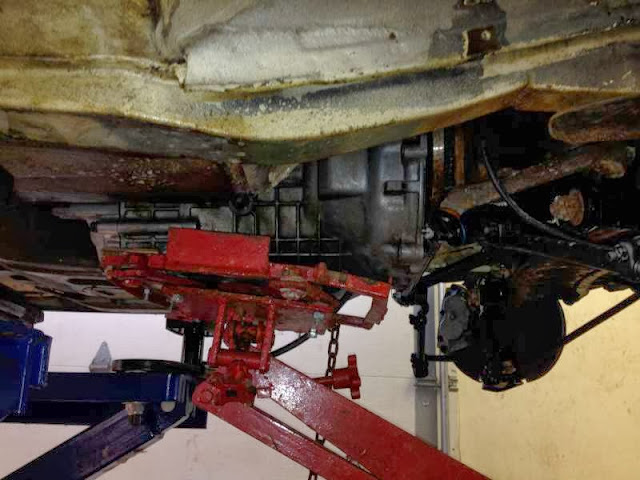 If I find four more milk crates, I’ll probably make two stacks of two on each side for added stability. And if I had shelf wood that’s more like 5’ wide instead of 4’, that’d be better. But really, this will work as-is.

So, there you have it. To install / remove a transmission with the car on a mid-rise scissors lift, you need:
I may not have another "eureka moment" for another 55 years. But this one was pretty good. I think it'll hold me. And the transmission. And the Heim Werner jack.

Posted by The Hack Mechanic at 5:25 PM